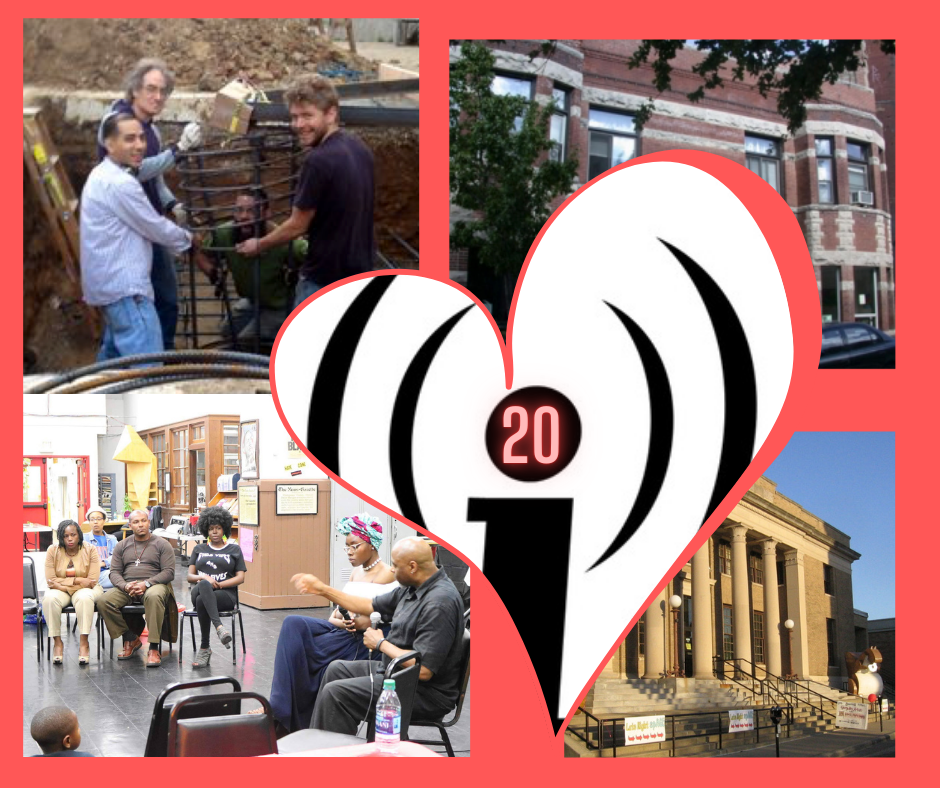 20 years ago, on September 24, 2000, a small group of people gathered in a living room near Carle Park and decided that Urbana-Champaign needed its own Independent Media Center. They began collectivizing equipment and passed-the-hat for an "endowment."

20 years later we own and manage a 30,000 sq ft community arts center (which we converted from an old post office building). We continue to publish a monthly newspaper (the Public i), house a low power radio station (WRFU Radio Free Urbana), and have long-term relationships with our other working groups: "UC Books to Prisoners" and "Makerspace Urbana". Over the years, we have been the fiscal sponsor for over 41 organizations (the IMC is the nurturing ground where groups plant their ideas).

Our building is a venue for events, emerging artists, and a community organizing space. And this year, during the COVID-19 pandemic, we started "Sounds like Community" a virtual weekly showcase of artists and organizers.

We invite you to join our year-long celebration of our 20th birthday! Due to the pandemic, we had to transform our major anniversary convergence into virtual events! But that means that we can celebrate all year long and feature people who have moved far away.

All are welcome -- all events are free and open to the public. Come on in.

Spring 2021: a history harvest! -- a collaborative community project to collect, preserve, and share the UCIMC's history! // Note that the project is two-pronged. Dr. Kathryn Oberdeck's crew will also be collecting history around local LGBTQIA+.

We still need an event where we can hear the history of WRFU! If you want to be part of this event, you can email kmedina67 at gmail dot com.

Also in 2021, there will be multiple events around the topic of "A Storytelling Workshop: Laying a Cornerstone Skill in the Time of a Pandemic." Can we hear about the lived experiences of people outside our tightened circles? Can we still experience other cultures if we cannot travel? Storytelling is a vital skill for journalists, history professors, union organizers, social activists, community-builders, poets, artists, musicians, and even nonprofit boards. Now is the time to sharpen our storytelling skills in order to create the world we need.

Brought to you by The Public i newspaper (a paper of the people) and WRFU 104.5 FM (a community radio station) — two of the working groups at the Urbana-Champaign Independent Media Center.

All events are free and open to the public.
Supported in part by a City of Urbana Arts Grant.

Note: there are 2 more Grassroots Journalism events in the planning stages. Those 2 will be more like workshop events. This first one is just laying the groundwork. 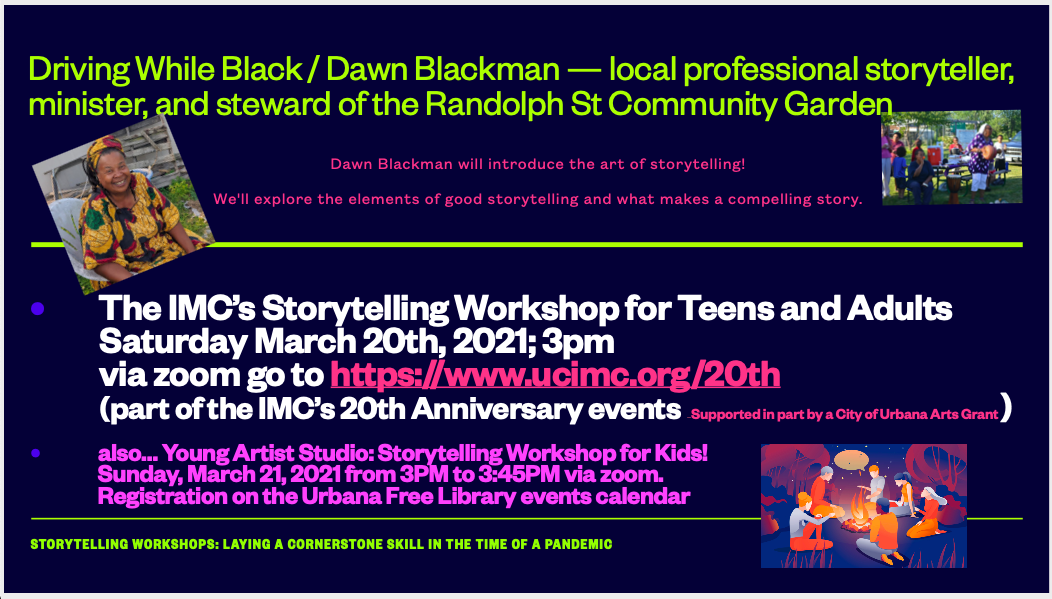 In order to build a better world, we need to hear each other’s stories.
The IMC 20th Anniversary Committee is excited to present ...

a weekend of virtual storytelling workshops

Mother Dawn is a local storyteller, minister, and steward of the Randolph St. Community Garden. 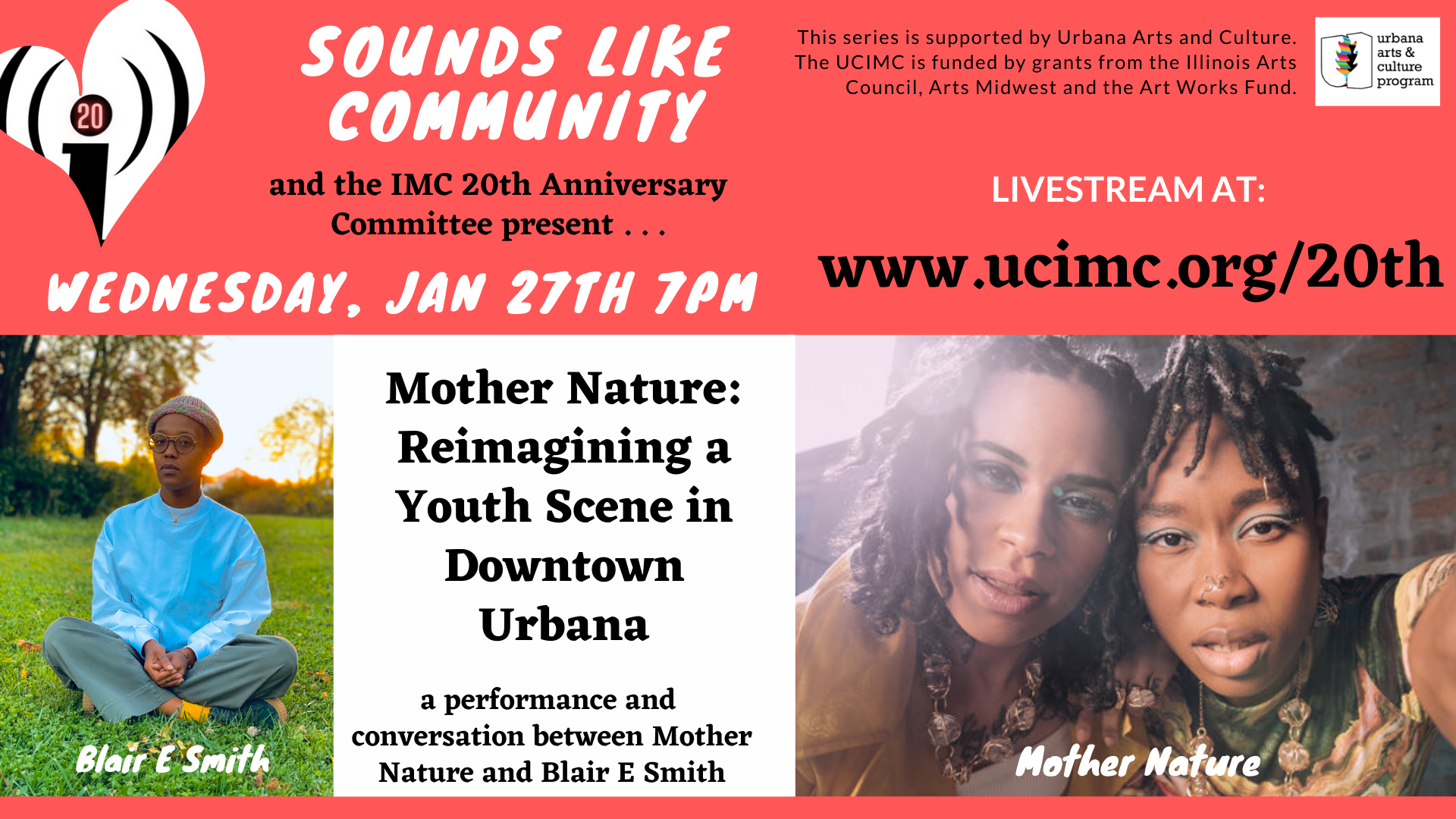 On January 27th, 2021, the IMC featured Mother Nature in performance and conversation. As we continue our year-long celebration of the IMC’s 20th anniversary, we are thrilled to bring Mother Nature back to a virtual Urbana gathering with Blair E Smith to discuss reimagining a youth scene in Urbana.

This event was supported in part by the Urbana Arts and Culture Program.

Mother Nature is the irresistible force of Klevah and Truth - emcees devoted to building a legacy founded on defiance and self-discovery.The Chicago-based duo is the answer for listeners seeking both substance and simplicity. As educators, they have mastered the ability to deliver weighty content through uplifting barz that pierce the conscience. With peace and lvoe as their weapon and community at their foundation, these gr8thinkaz are on their way to provoking a pivotal shift in the next generation. www.mothernaturebarz.com

Blair E Smith loves to rigorously play and make Black girl sounds, spaces, lands, planets, and galaxies with Black girls. Her artist-scholar-curator dreams and praxis emerge where Black girlhood as a creative and relation building life force with Black girls/women, Black feminist poetics, sound, and alternative modes of cultural work and production meet. Her work has previously explored poetics and sound as practiced with Black girls and collective Saving Our Lives Hear Our Truths (SOLHOT), a space to envision Black girlhood and our world otherwise, locally and galaxy-wide. She is a post doc fellow in art education with the Krannert Art Museum at the University of Illinois- Urbana-Champaign (2019-21). Her curatorial and artistic praxis is focused on Black girl celebration, Black feminist poetics, sound art and design with Black girls locally and worldwide.

More about the panelists:

Supported in part by a City of Urbana Arts Grant

This event is part of the series "Storytelling Workshops: Laying a Cornerstone Skill in the Time of a Pandemic."

More about Urbana Champaign Books to Prisoners
Since 2004, the "Urbana Champaign Books to Prisoners" program has sent an astonishing 159,688 books in 47,334 packages to 22,436 people in Illinois' prisons. This community-powered program puts books in the hands of those who might otherwise feel forgotten. Join us to hear about how this program - and others like it - have changed lives.

(Watch the video or listen to the archived mp3 - excellent music, then the talk begins about 19 minutes in)

More about the panelists:

State Representative Carol Ammons represents the 103rd District of Illinois and is a career activist fighting for equality and justice. Carol grew up in Joliet, IL, and has been a resident of Champaign-Urbana for about 18 years. She is the first African-American woman elected to the 103rd District and is now the voice and advocate of her constituents in Champaign-Urbana. While in office, Representative Ammons has dedicated her time and energy toward helping her district and the state through public service. As an activist turned lawmaker, Representative Ammons is laser-focused on cultivating the crucial relationship between community organizers and the state legislature. She knows that in order to achieve equality, lawmakers and activists must align their goals, policies, and actions.

James Kilgore is a formerly incarcerated activist, researcher, and author based in Urbana, Illinois.He is the co-director of FirstFollowers Reentry Program and the author of five books, including “Understanding Mass Incarceration: A People’s Guide to the Key Civil Rights Struggle of Our Time.” He is also the director of the Challenging E-Carceration project of MediaJustice’s #NoDigitalPrisons campaign.

Malkia Devich-Cyril is an activist, a writer, and a public speaker on issues of digital rights, narrative power, Black liberation, and collective grief. Devich-Cyril is the founding executive director of MediaJustice, and a Senior Fellow at the organization.

Shaya Robinson serves as an advocate for the underrepresented in a variety of ways. As an artist, she’s performed for a wide variety of charity events and she won an ACE (Arts Culture Education) award for fostering and maintaining a safe space for artists of all ages to weave social justice ideas and the arts to shine light on and uplift the most underserved communities. As an advocate for the arts, she runs a poetry and arts space called S.P.E.A.K Cafe (Song Poetry Expressions Art Knowledge) that focuses on social and political issues. Shaya is currently on the board for Urbana's Independent Media Center and 40North. She hopes to leave a legacy that shows her love for local raw art and the need for political and social change merging and making a difference.

20th Anniversary Panel Event 1 was held Wednesday, September 30th, 2020; 7-8:30pm
"Independent Media: Where we've come from and why we need it more than ever!" with panelists Sarah Lazare, Tanya Parker, and Sascha Meinrath and Danielle Chynoweth (as Moderator).
Listen to the archived audio from this conversation.   Watch the archived video recording

These anniversary events celebrate the Urbana-Champaign Independent Media Center's 20th Anniversary and are part of the Sounds Like Community Wednesday-night Series.

These events are made possible, in part, by grants from the Urbana Arts and Culture Program and The Illinois Arts Council Agency.